In our laboratory we study redox-active metalloenzymes and their functions in microbial metabolism in anaerobic bacteria and archaea. Archaea are genetically distinct from eukaryotes and bacteria, and represent a unique domain of living organisms. Anaerobic bacteria and archaea impact human life in many ways; they play critical roles in global nitrogen and carbon cycles, they are useful to detoxify environmental, military, and municipal waste sites, and as part of the human gut microbiome they aid in digestion and the development of the immune system. Anaerobic microorganisms also can be pathogenic, and various species of Clostridia cause diseases such as tetanus, gangrene, acute ulcerative gingivitis, botulism and antibiotic-associated inflammatory diarrhea (C. difficile). Thus, research is useful to reveal how specialized metalloenzymes function in anaerobic metabolism to exploit the metabolic potential of these organisms for industrial, agricultural, biomedical and defense purposes.

Anaerobic methane producers, the methanogens, are the largest group of archaea, and we have been investigating the mechanism by which methanogens carry out large scale synthesis/cleavage of two-carbon acetyl units from one-carbon precursors/products. Around two-thirds of the total global biogenic methane formed on Earth are produced by way of this process. The reaction is catalyzed by a large 2,000 kDa multienzyme complex known as the ACDS complex (acetyl-CoA decarbonylase/synthase) that can make up as much as 25% of the soluble protein in the cell. Both the carbon-carbon and the carbon-sulfur bond of acetyl-CoA are formed/broken by the ACDS complex in a highly unusual biochemical mechanism involving metal-based carbonyl group insertion, and/or methyl group migration. Different catalytic roles of the five ACDS subunits include: CO dehydrogenase (??), acetyl-CoA synthase (?) and B12 corrinoid methyltransferase (??) as shown below. The methanogens are the largest group of archaea, and we have been investigating the mechanism by which methanogens carry out large scale synthesis/cleavage of two-carbon acetyl units from one-carbon precursors/products. We use molecular biological and biochemical techniques to explore the various reactions in this important multi-step process. Our overall goal in studies on the mechanisms and functions of metalloenzymes is to provide a fundamental understanding of the unusual metabolic and physiological adaptations of important anaerobic microorganisms.

In anaerobic bacteria that produce acetate from one-carbon units, known as the acetogens, a related CODH/ACS system catalyzes acetate formation using a fundamentally similar metal-based biochemical mechanism. However, the bacterial protein structures are very different from the archaeal ACDS complex. To better understand both systems, we carried out a side-by-side comparison of the spectroscopic and enzymatic properties of the isolated archaeal ACS ? subunit with the bacterial acetyl-CoA synthase.

Our results revealed unexpected protein conformational control over the organometallic chemistry that takes place at the A cluster, a Ni- and Fe- containing active site metal center. Comparison of different ACS constructs showed acetyl C-C bond fragmentation was promoted by interdomain interactions involving the bacterial ACS N-terminal domain (a region of the protein not found in archaea). Our analyses of the role of a nearby phenylalanine residue showed remarkable effects on catalysis. We see that Nature provided the reactive Ni center with a repositionable aromatic solvent shield, whose action is linked to the protein conformational state so as to selectively avoid CO substrate inhibition and to capitalize on the most productive sequence of steps in the reaction, maximizing the efficiency of acetyl-CoA synthesis. The enzyme thereby acquired the means to handle special requirements of an atypical organometallic mechanism, not found in organisms outside of anaerobic bacteria and archaea.

A scheme that illustrates the individual steps and their connections with open/closed conformational states is shown below. 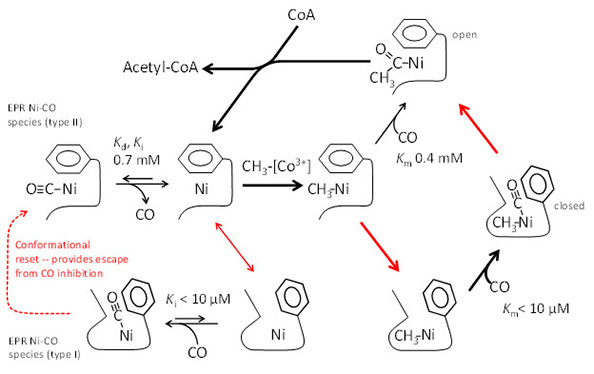 Scheme 2. Different modes of CO binding to acetyl-CoA synthase and the role of a conserved phenylalanine in the coordination environment of Ni.

Our current focus is to apply our understanding of anaerobic microbial metabolism to studies on anaerobic bacteria that are pathogenic to humans. We are currently learning how C. difficile obtains a metabolic advantage during infection and colonization in the human colon by employing enzyme systems similar to those that we have studied previously in other non-pathogenic bacteria and archaea. A better understanding of the novel enzymes involved will present additional targets with new opportunities to develop rational therapies to control infections involving anaerobes.