During homologous recombination maternal and paternal chromosomes exchange genetic information contributing to genetic diversity and driving evolution. Just as an important role of recombination is to ensure faithful segregation of homologous chromosomes in developing gametes. Both reduced recombination efficiency and abnormal location of recombination events are well-documented prerequisites of aneuploidy (the wrong number of chromosomes), which is the leading cause of miscarriage and birth defects in humans. Recombination predominantly occurs in discrete, few hundred base pairs-wide regions of the genome called recombination hotspots. Up to 40,000 hotspots are present in the human genome with their positions largely determined by the DNA binding specificity of the PRDM9 protein. Although sequestering recombination from promoters and other important genomic regions into hotspots could protect them from mutagenic effects of recombination, recombination hotspots within or between repetitive sequences can trigger recurrent deletions and insertions, leading to diseases such as hemophilia A, ß-thalassemia, polycystic kidney disease and many others.

Our lab focuses on the PRDM9-dependent and independent mechanisms that control homologous recombination in mammals.

Our lab has a long-standing collaboration with the lab of Dr. Camerini-Otero at the National Institutes of Health. We also currently collaborate with Dr. Samollow from the Texas A&M University and Dr. Trachtulec from the Institute of Molecular Genetics in Czech Republic. 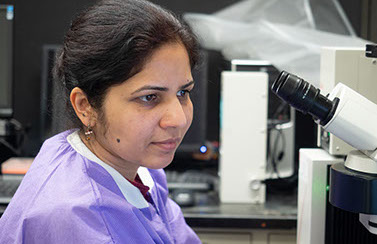 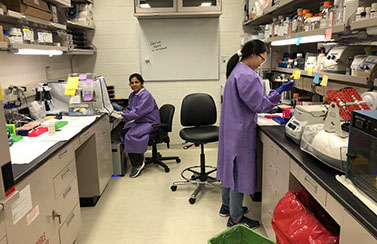 We were able to generate the first genome-wide high-resolution map of hotspots of recombination initiation in a metazoan organism (the mouse) that enabled robust analysis of their molecular characteristics. We later developed a technique suitable for routine mapping of recombination initiation sites that highly broadened the arsenal of feasible approaches in hotspot biology research, as well as general recombination field. This allowed us to demonstrate that the PRDM9 protein is responsible for determining essentially all hotspots, and without PRDM9, in the Prdm9 knockout mice, recombination is initiated predominantly at promoters and enhancers. This indicated the biological significance of PRDM9 in sequestering recombination away from functional genomic elements.

In our latest study, we generated and compared female- and male-specific maps of recombination hotspots in the mouse and demonstrated that the majority of hotspots display sex biases that seemingly stem from differential DNA methylation state of male and female genomes at the time of recombination initiation. We also found that in females, crossovers are suppressed near the ends of chromosomes, possibly as an adaptive mechanism, as crossovers in these regions are correlated with increased risk of aneuploidy and consequent miscarriage or birth defects.

Our current studies are devoted to understanding the PRDM9-independent pathway to initiate homologous recombination. In yeast, that lacks the Prdm9 gene, recombination hotspots are predominantly located at the gene promoters. A similar trend is seen in Prdm9 knockout mice and species that gained, but lost Prdm9 over evolutionary time. This default ancestral mechanism presumably takes over in humans carrying mutations in the Prdm9 gene.

To understand what controls distribution of recombination hotspots in the absence of PRDM9 and the consequences of the loss of Prdm9 on future generations we are investigating recombination landscape in two Prdm9-less species, the dog and the short tailed opossum.