Uterine leiomyomas or fibroids are the most common tumor in the female reproductive tract, and can be associated with a wide range of debilitating symptoms, including heavy menstrual bleeding, pelvic pain, pelvic pressure, urinary incontinence, constipation, difficulty achieving pregnancy, pregnancy loss, and delivery complications. Within the active duty population, as well as for the population as a whole, symptoms most dramatically impact women during their reproductive years. In addition, there is a clear health disparity, as uterine fibroids are more common and symptomatic among women of African descent. These symptoms not only severely curtail readiness among our active duty women, but also harm the female dependents of our active duty men.

Over the past 15 years, the the Catherino Lab has focused on understanding the mechanisms involved in fibroid development. We have developed the first and most durable in vitro and in vivo model systems for the study of uterine fibroids, which previously could only be studied as surgical specimens. Using these model systems, we have characterized not only the molecular changes that result in fibroid cell proliferation, but also the extracellular changes that are central to the bulk symptoms. We are currently characterizing the molecular changes induced by various therapies to identify central mechanisms to control fibroids. 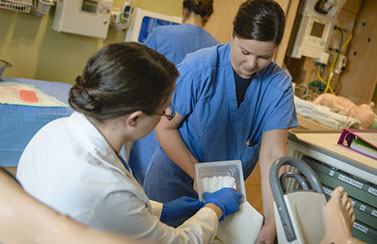 The investigations lead by Dr. Catherino, with his team of internationally recognized colleagues including Drs. Minnie Malik, Joy Britten, and over 50 additional scientists and collaborators, have resulted in tremendous advancements for the field of study, as well as directly impacting patient care. Our in vitro models are used internationally to more rapidly advance fibroid understanding, have invigorated the medical management of fibroids using hormonal analogues, and have developed novel therapeutic avenues for future advancement. This important work has been recognized with continuous funding.