Malaria continues to threaten 40% of the world’s population and is responsible for the death of just under half a million people annually.  Visitors to endemic regions, including military personnel, are at the high risk of acquiring the disease due to the lack of natural immunity, which requires years of parasite exposure to develop. Currently, chemotherapy/chemoprophylaxis, insecticide-treated bed nets, and other mosquito avoidance strategies are the primary malaria control measures in use but are constantly threatened by the development of resistant parasites and mosquitoes as well as interruptions in drug supply. The recent emergence of parasite lines that are less sensitive to the current first-line  anti-malarial, artemisinin, and the recognition that artemisinin treatment does not eliminate sexual stage parasites has made it clear novel approaches are needed to treat and block the spread of malaria, which is the focus of the Williamson Laboratory.

The complex life cycle allows the parasite to avoid many standard defenses used by the human immune system, but also provides multiple points for interventions (Fig.1). Ongoing projects in the Williamson lab are directed toward: Fig. 1) The Plasmodium parasite that causes malaria is transmitted from person to person by a mosquito. Parasites are introduced into the bloodstream by the bite of an infected mosquito and then travel to the liver. After development in liver cells, parasites are re-released to the bloodstream where they now invade red blood cells and replicate, producing 16-32 new parasites every two days. Instead of continuing to replicate, some parasites differentiate into either male or female gametocytes over the course of 12 days. Gametocytes, after being taken up in a blood meal by a mosquito, are stimulated to fertilize and begin a developmental cascade in the mosquito that leads to the production of sporozoites, which are infectious to humans. Sporozoites are stored in the salivary gland of a mosquito until release during another blood meal, initiating a new infection. https://commons.wikimedia.org/wiki/File:Life_Cycle_of_the_Malaria_Parasite.jpg

Fig. 2) Gametocyte differentiation.  A subpopulation of schizonts produces progeny, called merozoites (Mero), that after RBC invasion are committed to developing into either a male or a female gametocyte. Development takes 10-12 days and progresses through seven stages: 1) ring,  2) trophozoite (troph), 3-7) Stage I to V gametocytes.

The host specificity of P. falciparum makes direct investigation of the infection in humans critical to the development of effective interventions. Over 50 years ago human passive transfer experiments clearly demonstrated a key role for naturally acquired antibodies that protect against malaria. However, reproducing this immunity by vaccination has proven difficult due to antigenic variation, genetic polymorphism, limited immunogenicity of recombinant proteins, and difficulties producing recombinant proteins with native conformation. Utilizing advances in high throughput sequencing and multi-dimensional data analysis, we are taking a systems biology approach to understand the human response to repetitive challenges with P. falciparum-infected mosquitoes. Insights into the cellular and antibody responses and their association with clinical symptoms will be used to develop alternative vaccinology approaches to induce protective immunity. This strategy bypasses the use of recombinant antigens produced in heterologous organisms for screening and seeks to identify the protective responses that have evolved in the human host, including the initial innate response and the maturation of the Ig variable region following infection (PMID: 33768273). Ultimately, Ig variable region sequences associated with protection will be generated recombinantly to confirm anti-P. falciparum activity. Target antigens will also be identified and used in conjunction with the insights gained into the early innate and cellular immune responses to develop vaccine strategies that mimic the protective human response.

IN VITRO AND IN VIVO MOLECULAR SIGNALING OF SEXUAL DIFFERENTIATION

For malaria to be transmitted from human to human via a mosquito, an intraerythrocytic parasite must undergo sexual differentiation into either a male or female gametocyte (Fig. 2) (PMID: 29975590). We identified the first P. falciparum gene found to be required for gametocyte development, Pfgdv1, and the set of genes differentially expressed in early gametocytes (Pfge genes) (PMID: 23093935). Localization studies demonstrate that in parasites undergoing gametocytogenesis PfGDV1 is located at the nuclear periphery adjacent to the replication origin protein MCM2 and histone modifying enzyme PfSir2 (Fig.3). This location could suggest that Pfgdv1 plays a role regulating gene expression during early gametocytogenesis. Currently, proteins and nucleic acids associated with PfGDV1 are being identified by chromatin and protein immunoprecipitation, as well as fluorescence in situ hybridization (FISH), and will be tested for a role in the regulation of Pfge genes. Pfge gene function is also being evaluated by targeted gene disruption and other molecular techniques (PMID: 23572579, PMID: 21498641, PMID: 21965515, PMID: 22129310). Combining these approaches will begin to define mechanisms the parasite uses to initiate sexual differentiation and develop into mature gametocytes. Moreover, field studies evaluating sexual differentiation in vivo by expression profiling and to determine if genetic polymorphisms in the Pfgdv1-related transcriptome correlate with transmission rates (PMID: 33268801, 31086187, 27938356 and 25009232  ). Such molecular relationships will be used to develop genetic or expression signatures of high transmission capacity to direct future control malaria control efforts. 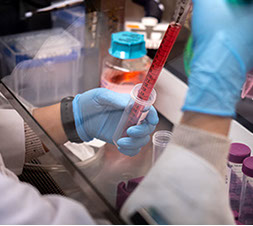 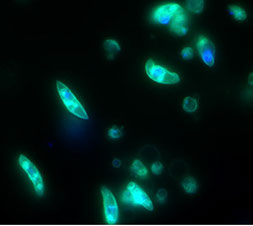 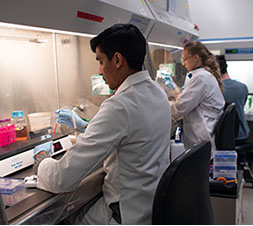 A sensitive, fluorescence-based, gametocytocidal assay has been developed in the Williamson Lab to facilitate screening molecules for activity against sexual stage parasites (PMID: 21316401, PMID: 25512421). The miniaturization of this viability assay (PMID: 23454872) allowed the screening of more than 6000 bioactive compounds for gametocytocidal activity (PMID: 24434750). Seven compounds had IC50s of <50 nM against late stage (III-V) P. falciparum gametocytes, including Torin 2 (IC50 = 8 nM). This compound is >1,000 times less effective against mammalian HepG2 cells and completely blocks P. berghei oocyst production in a mouse model of transmission. Interestingly, a closely related derivative, Torin 1, which has similar activity as Torin 2 against the mammalian target, mTOR, was 200 times less effective against gametocytes. This finding coupled with the lack of mTOR homologs in Plasmodium led us to hypothesize that the human and P. falciparum Torin 2 targets are distinct and that this difference will allow the development of an effective P. falciparum-specific drug. Additional Torin 2 analogs are being developed by collaborators at the National Center for Advancing Translational Science (NCATS) at NIH, and this project has been selected by the Therapeutics for Rare and Neglected Diseases Program at NCATS for further drug development efforts (PMID: 33073193).